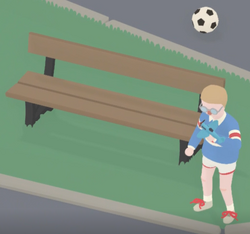 The Wimp is a villager in Untitled Goose Game. He is a young boy who plays by himself on High Street. He appears quite afraid of geese, and will run away if one honks near him. It is fortunate that he knows the phone number of the TV Shop Owner, and will call her if the need arises. His actions include playing with his toy plane and soccer ball. He will occasionally check his shoelaces to make sure they are tied correctly, or check his glasses. He is the target of some of the pranks on the Goose's to-do list. You can also lead him anywhere by honking at him or taking his glasses and standing in a radius of him. Players have put him in the lake, Chopped him in half with gates, and more terrible things like putting him in the groundskeepers garden and making the groundskeeper hammer him or faint on him. However, for things like chopping him in half, there is no pain or response since this is not meant to be part of the game. You can trap the groundskeeper out of the garden by making the boy loose his glasses in the gateway. However, if the keeper sees you with an item, he will glitch through the wimp. Honking at him while he is in the lake looking for a certain pair of glasses will make him take an unexpected dip. Though many brave geese have tried to kill the wimp, with gates and doors alike, he always glitches and to get him out, you have to reset. The wimp can’t get in the pub or back gardens, like he can in the groundskeepers garden. If you use his glasses to lead him to your “home” remember every once in a while, to bring him some food. The wimp is the easiest to fiddler with. He must be rich to keep buying back his toy plane. Of corse, it’s caused by the goose. Peace was never an option!!!

These items can be picked up or dragged.

These items can only be pushed.

These items cannot be taken or removed from the area, but instead are used/operated when clicked on.